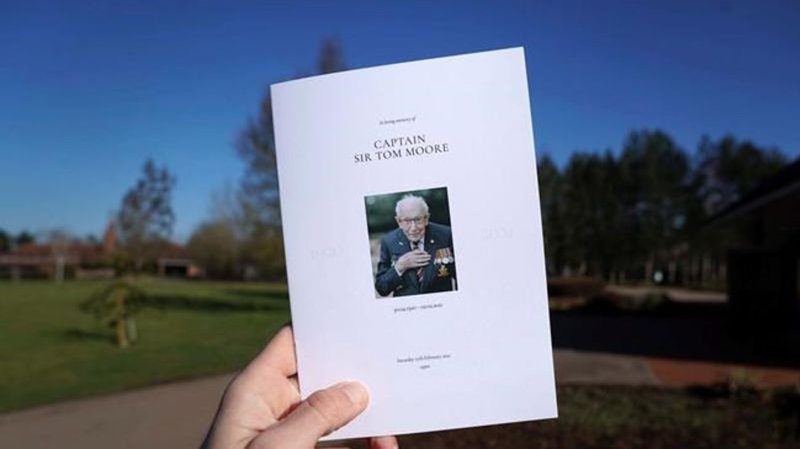 In a spectacular send-off, a flyover in is memory will also take place during the service with a Second World War-era C-47 Dakota, part of the Battle of Britain Memorial Flight.

He raised almost 33 million pounds ($57 million) for healthcare charities by completing 100 lengths of his garden before his 100th birthday in April previous year.

Defence Secretary Ben Wallace said: "In national emergencies ordinary people do extraordinary things and inspire us all to pull together to overcome adversity".

His funeral will be attended by eight members of his immediate family - his two daughters Hannah Ingram-Moore and Lucy Teixeira, four grandchildren and his sons-in-law.

"Few will have heard of Sir Tom before this crisis but his contribution and example now lives on in us all".

His daughter Ms Teixeira, 52, then paid tribute to Sir Tom, who captured the hearts of the nation with his fundraising efforts during the first coronavirus lockdown when he walked 100 laps of his Bedfordshire garden before his 100th birthday, raising more than £32 million for the NHS.

"Daddy, you always told us "Best foot forward" and true to your word, that's what you did past year", Moore's daughter, Lucy Teixeira, said at the service.

The serviced closed in a way that Captain Sir Tom would surely have appreciated, with Lieutenant Tim Exton, commander 1st Battalion, The Yorkshire Regiment, reciting John Maxwell Edmonds' famous epitaph for the fallen: "When you go home, tell them of us and say, for your tomorrow, we gave our today".

A section was released, in which he said he would "like to watch my own funeral from a distance" and laugh at "everyone making a lot of fuss over me".

Soldiers performed ceremonial duties at the service for the 100-year-old Moore, whose charity walk inspired the nation and raised nearly 33 million pounds (more than $58 million Cdn).

He had served with the Duke of Wellington's Regiment during World War II.

After the committal, the strains of Frank Sinatra's "My Way" filled the chapel - the song picked by Captain Sir Tom, who also chose as his characteristically humorous epitaph "I told you I was old", in reference to the comedian Spike Milligan's "I told you I was ill".

The family set up an online book of condolences that gathered thousands of messages.

Captain Sir Tom's performance of You'll Never Walk Alone, a United Kingdom chart-topping charity single he recorded with Michael Ball, was played at the start of the ceremony.

"As per the family's wishes, the public are reminded to continue to support the NHS by staying at home".

Once Covid-19 restrictions permit, the family will inter Sir Tom's ashes in Yorkshire, with his parents and grandparents in the Moore family plot.

Australia's Victoria says COVID-19 curbs to return to pre-Christmas settings
Offices will be open across the private and public sector both in the CBD and across suburban and regional locations. This will be the first time since the March lockdown in 2020 that offices will be open to such capacity.

Trump 'ain't going anywhere,' ally Cruz says as leading right-wing Republicans gather
Mr Trump's speech at the culmination of an event packed with grievance at the 2020 presidential election result. Trump will flirt with another run to freeze the 2024 field but believe he will ultimately opt out of running.