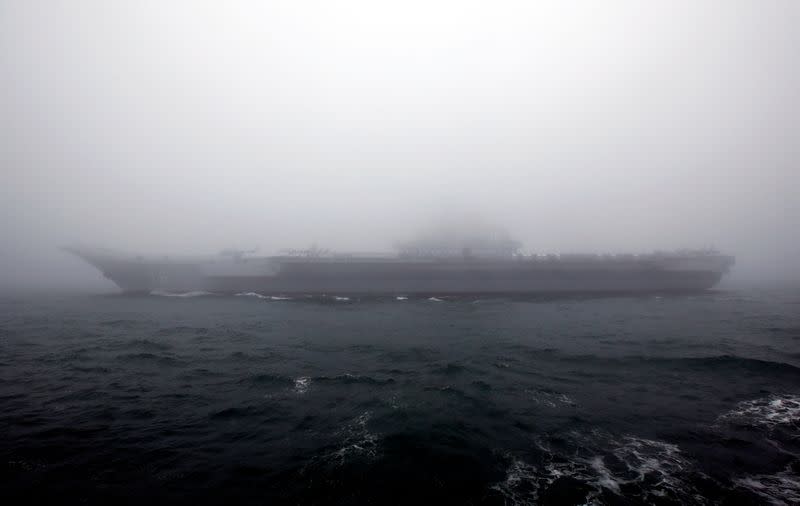 On Monday, the Andersen Air Force Base, which is about 1,800 miles east of China, flexed its military strength with at least a dozen aircraft from the US Navy and Air Force.

Taiwan's Defense Ministry said the Liaoning, China's first operational aircraft carrier, and five accompanying warships passed first through the Miyako Strait, located between Japan's islands of Miyako and Okinawa, to the northeast of Taiwan, on Saturday.

The current location and destination of the carrier group is unknown, but Taiwan has sent its own vessels to monitor them.

On Monday, a U.S. Navy sailor died after contracting the coronavirus, marking the first death of a sailor assigned to the coronavirus-stricken aircraft carrier Theodore Roosevelt.

The USS Ronald Reagan, meanwhile, is now docked at a Japanese port after its crew were similarly afflicted.

Some 585 of 4,309 personnel on the Theodore Roosevelt, which is anchored off Guam, have tested positive for the coronavirus and 400 more sailors are awaiting testing.

Taiwan's defense ministry said that also on Saturday evening, the USS Barry-DDG 52, an Arleigh-Burke class guided-missile destroyer, sailed through the Taiwan Strait, likely in an act of support for Taiwan.

Officials said the USS Reagan is now docked in Yokosuka, Japan, for maintenance, but crew members have also reported coronavirus cases onboard.

In late December, shortly before presidential and parliamentary elections in Taiwan, China's newest aircraft carrier, the Shandong, sailed through the sensitive Taiwan Strait, a move condemned by Taiwan as attempted intimidation.