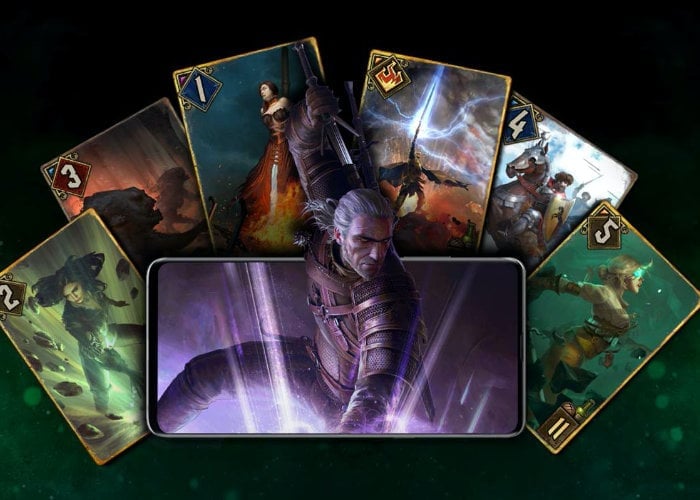 Gwent is a card game that originated from The Witcher books, before becoming a mini-game in The Witcher video games.

Previously the developers from CDPR have announced the end of service for the console versions of Gwent so that the team could focus on the PC and mobile platforms.

GWENT is developed by CD Projekt Red and was originally released as a standalone game on PC, Xbox One and Playstation 4 back in 2018.

If you are interested in trying it out, you can download it via the Google Play Store for free.

Those who install and login to the game on the new Android version of the game will be able to claim an Ultimate Premium Keg, which will unlock a number of premium cards that can include cards from any set, including the base set and all expansions. If you're an iOS user who never got around to playing the game, but have been inspired by this article, it's available on the App Store here.

GWENT on Android is compatible with devices running Android version 7.0 or later, with at least 1.5 GB of RAM on board.

You can transfer your progress and purchases to the Android version through a GOG account associated with another version of the game. Whether a device meets the game's compatibility requirements can be checked by visiting GWENT's product page on Google Play. In addition, there will also be extra daily rewards available for all versions of GWENT throughout launch week.

Since being in Beta and being released as a standalone title, GWENT has seen many changes and an esports scene has also emerged.

YouTube Default Video Quality Being Reduced To Standard Definition
Due to more people working and studying from home, the internet's underlying infrastructure is expected to face "an enormous stress test", industry analysts have told CNN .

Covid-19 survived in cabins aboard Diamond Princess for 17 days
Amesh Adalja, who works at the Johns Hopkins Center for Health Security, told Business Insider's Morgan McFall-Johnsen. The finding suggests the virus can persist on surfaces for a lot longer than previously thought .

Mobile operators send coronavirus message to everyone in the UK
The government has had to enlist the support of operators to send the messages because it lacks the capability to do it itself. Some users on Twitter said they have already received the message saying: "CORONAVIRUS ALERT GOV.UK".

Coronavirus impact: English players' union seeks urgent talks to protect salaries
The union is also part of discussions at worldwide level regarding contracts and the resumption of league action. The Essex Senior League also said that a decision has yet to be communicated as to how best to end the season.

B.C. offers $500 monthly rental rebate, moratorium on evictions, rent freeze
The funding for the rental protection program will come from a $5-billion fund the B.C. government recently announced, he said. The smaller number of court-ordered evictions are up to the courts, which operate independently of government, she added.

Windows 10 updates halted due to coronavirus - with one exception
If you're anyone's source of technical advice, now is a good time to remind them to watch out for suspicious emails and links. Case in point: Microsoft, which has just announced its decision to put less important Windows updates on hold.

Biden: "I think we've had enough debates"
His supporters have called on Sanders to drop out of the race, but Biden has said that decision is up to the senator. Kyle Olson is a reporter for Breitbart News.

Jackson Browne has the coronavirus: 'Stay self-quarantined'
The singer-songwriter says he believes he contracted the virus at the Love Rocks NYC benefit on March 12 in NY . Despite his circumstances, Browne says he feels "lucky that I'm not really affected".

COVID-19: Centre to provide Rs 170,000 crore relief package
For women who got gas cylinders under the Ujjwala scheme, the government has announced free cylinders for the next three months. Collateral-free loan will be doubled to Rs 20 lakh to 63 lakh women self-help groups, impacting 7 crore households.

Katrina Kaif denies starring alongside Amitabh Bachchan in Deadly
Recently they featured in a jewellery brand television commercial where Katrina played daughter to Amitabh and Jaya Bachchan. The story includes a protagonist who is on a journey of self-discovery with a bit of humour.