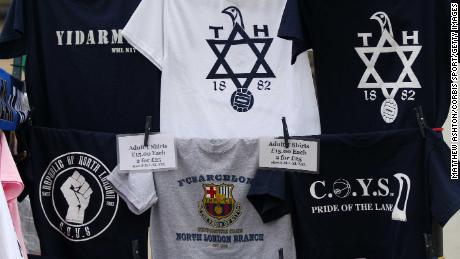 Also in extended use: "a supporter of or player for Tottenham Hotspur Football Club".

The definitions of the words "yid" and "yiddo" - derogatory terms for Jews - have been updated in the Oxford English Dictionary to include "a supporter of or player for Tottenham Hotspur Football Club".

The word is typically used to refer to both Jewish people - albeit one that many find offensive - and supporters of Tottenham Football Club.

A year ago the north London club carried out a consultation with fans on their use of the Y-word and received more than 23,000 responses.

Usage of the term to describe Jewish individuals can be thought about offending, yet some Spurs fans have actually traditionally embraced the word in balcony incantations.

With concern from Tottenham and Jewish community leaders that the definition was misleading and the words' offensive meaning had not been highlighted, the dictionary included further context.

A spokesperson for the OED claimed: "As a historic dictionary, the OED documents the use and also advancement of words in the English language".

"We reflect rather than dictate how language is used, which means we include words which may be considered sensitive and derogatory". These are always labelled as such.

Chants of "Yids", "Yid Army" and "yiddos" are frequently heard in the home stands at Tottenham games, with some Spurs fans justifying their use by saying they have "reclaimed" the words.

"We will certainly make sure the context for this link is extremely clear in both interpretations".

A debate has broken out following the Oxford English Dictionary's (OED) decision to expand its definition of the word "Yid".

In 2010, he and his brother Ivor made a short film, "The Y-word", that featured footballers saying use of the word was racist and offensive.

In December, Tottenham launched the outcomes of a survey on "the Y-word" that obtained greater than 23,00 0 reactions.

Almost half of respondents wanted fans to abandon the chant or use it less, with 94% acknowledging it could be considered a racist term against a Jewish person.

Nearly half of all respondents said they would prefer to see supporters chant the Y-word less or stop using it altogether.

Comedian David Baddiel, himself Jewish, has been a vocal critic of the use of the word in relation to Tottenham, regardless of context.

A spokesman for the Community Security Trust, a charity working to protect British Jews from anti-Semitism, said: "The OED have introduced several Jewish-related terms, so it is important that those which are anti-Semitic or otherwise offensive are clearly marked as such".

"What it will weirdly give succour to is: when The Y-Word campaign first started, a Spurs fan said to me, a Jewish person who feels uncomfortable with that word: 'Fuck off, it's our word now.' Can you imagine something similar with any other race hate word?" The club could and should be doing more to prevent its use.