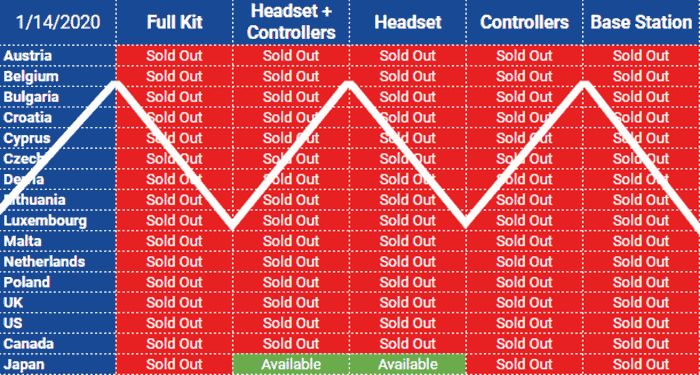 Valve Index out of stock around the globe ahead of Half-Life: Alyx launch

The best way to play Half-Life: Alyx is sold out nearly everywhere in the world, but at least Valve hopes to replenish stocks before the game arrives in March.

The company's ploy to ship high-end VR off the back of a major game release appears to have worked wonders, perhaps even surpassing expectation.

As of 14 January, the stock levels of all Valve Index kits worldwide look exceedingly bleak - with only Japan having a few hardware morsels left to offer (but no base stations). The Valve Index headset sells for $499 by itself or $1,000 in a complete bundle with all the sensors and controllers you need.

Valve has now issued "notify me" email updates across its store pages. Once selected, you'll be redirected to a page that reads "we're busy catching up with demand for Valve Index". Try to buy an Index anywhere else and you'll only be able to sign up for email notifications for when they come back in stock.

Half-Life: Alyx - the first Half-Life game we've seen in more than a decade and the flagship title for Valve's Index VR headset - is on the horizon.

RoadToVR has been watching the stocks of the Valve Index kits closely since the announcement of Half Life: Alyx. The Valve Index is apparently sold out in pretty much every region where it's available, so if you were hoping to pick up a headset in anticipation of Half-Life: Alyx, good luck.

Just a week after the announcement of Alyx, RoadToVR noted that U.S. and Canada most Index kits were marked as sold out with a "Back in Stock Soon" message in place of the order button. All the more reason to stay on the ball and be ready to hit order when the time comes.